Growing up in North Devon surrounded by beautiful wild countryside and coast, a work opportunity brought me up to Bristol where I've lived for over 35 years.

An early memory, watching an image slowly materialise as if by magic on a blank piece of paper in my dad's photographic darkroom, sparked an interest in photography which developed several decades later (with some encouragement from an older brother) into making images of my own. I use both digital and film cameras and I've discovered that learning how to process black and white film and make prints using traditional and alternative processes is both enjoyable and a good way of "switching off" from the hectic pace and sometimes stressful things that life throws in your direction.

I've contributed work to exhibitions at The Bristol Central Library, The Folk House, The Showroom, Grounded, The Social Bar & Cafe and the Co-Exist Gallery at Hamilton House. 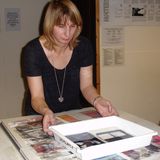